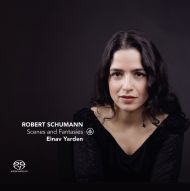 The three works on this CD span a period of fifteen years – years in which the young Schumann suffered forcible separation from his beloved Clara, followed by their marriage and a brief period of relative calm, to the increasing bouts of mental instability which were to close him off from the world around him until his death.

The piano Fantasiestücke op. 111 was composed in 1851 during a time of deteriorating mental health and increasing disillusionment with his post as Music Director of the Düsseldorf Music Society. In contrast to the youthfully extrovert Fantasiestücke op. 12 of 1837, these three untitled pieces are “of a serious and passionate character”, as Clara described them, their bold harmonies intensifying their expressivity.

The Fantasie in C major op. 17 is one of Schumann’s most powerful large-scale piano works, composed during the bitter period of his enforced separation from Clara.

Schumann completed his cycle of nine forest piano miniatures, Waldszenen, in 1849, while struggling with increasing bouts of mental instability and depression. Each piece is headed by a descriptive title. These masterly tone paintings display Schumann’s genius in creating miniature images consummate in expression, characterisation and mood.

About Einav Yarden’s previous recordings on Challenge Classics:
“She pairs Beethoven with Stravinsky to striking effect, merging that unlikely couple with imagination and exceptionally vivid playing.” – The Washington Post 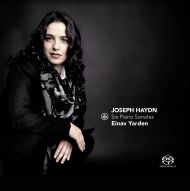 The six keyboard sonatas selected for this CD are taken from Haydn’s middle period, all written between 1773-1776 when he was loyally at the service of Prince Nikolaus Esterházy (and to whom three of the sonatas are dedicated). Even in the context of the vast development and change in his style in 60 years of composition – moving from the early Classical period and Style Galant, through the Empfindsamkeit and C.P.E Bach’s influence, to establishing and refining what is now the essence of “The Classical Style”- Haydn displays in a short period of 3 years an astonishing diversity of compositional techniques, modes of expression, style and characters. Most of the six selected sonatas are also quite rarely heard on the concert stage, have not been recorded often, and surprisingly, few pianists have been exposed to them. This CD sheds light on some of those wonderful ‘neglected’ sonatas, as well as aims at contributing to the growing revival of interest in Haydn’s genius as a keyboard composer.
Re­creating a 1770’s Sonata requires not just an automatic follower of direction signs, but a truly accomplished player. That is to say an imaginative, cultured, sensitive, and genuine musician who is an active participant in revealing the music’s structure, deep meaning and manifold beauty.

The pianist Einav Yarden juxtaposes two composers in Ludwig van Beethoven (1770-1827) and Igor Stravinsky (1882-1971) who are rarely named in one breath. While the name of Beethoven is mostly heard in the “classical triad” along with Haydn and Mozart, we usually group Stravinsky with Schönberg, especially as Theodor W. Adorno pronounced the two composers as antipodes and hence associated one with the other.
But Beethoven and Stravinsky?

For Beethoven, the piano was a central instrument, which gave him the opportunity of shining equally both as composer and pianist.
Five piano concertos, 32 sonatas, numerous variation works, bagatelles, individual pieces etc. demonstrate the purely numerical significance of the piano for Beethoven. In direct comparison, Igor Stravinsky’s oeuvre for piano is quickly browsed through. Three works for piano and orchestra, the sonata of 1924, some early works, etudes, barely a dozen individual pieces, some works for two pianos. But despite this rather sparse oeuvre, the piano was a central instrument also for Stravinsky. “Every note I wrote,” said Stravinsky, “was tried out on this instrument, every interval singly tested, heard again and again.” And Stravinsky, too, wrote piano works for himself to perform in the concert hall. particularly after 1920.